This article describes how can be configured an automatic USB hyperbackup, which is triggered by USB-connect.

The synology diskstation out of the box isn’t able to start an backup job automatically as reaction of USB hard drive connection.

When we talk about backups this is a quite poor solution. Wishable would be a trigger of a hyper backup job. Reason: hyperbackup does maintain a history of files. (like time capsule) and does compression.

In addition the copy button action can only handle the front usb port of the Synology.

My solution is derived from Bernd Distler's [1] solution. Bernd Distler is using autorun, a 3th party package. I wanted to find a solution without third party software.

The following article describes preconditions, the general workflow as well as the details how it is possible to trigger a hyper backup job start on USB connect event.

Originaly the USB-Copy app from Synology is intendet to do simple jobs like “copy file from USB drive to NAS” or “copy files from NAS to USB drive” when the copy button is pressed or a specific backup medium is detected. (UUID) It has to be installed by Synology package center.

Actions caused by copy button are affecting only the fron USB port while USB detecting actions are working for the back site USB ports as well.

The following screenshot is depicting it. 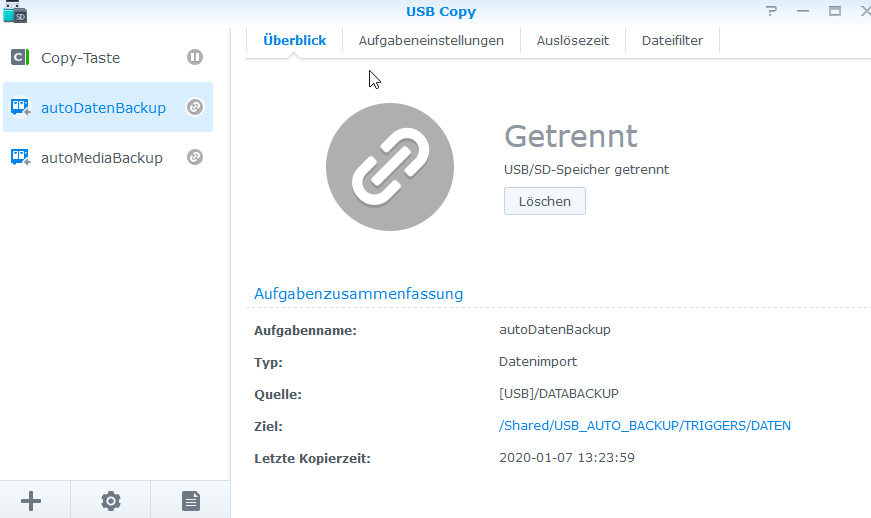 The same has to be done for the other USB drive:

The USB-Copy program lets beep the NAS after connecting twice.

After finishing the trigger file it beebs again twice.

The trigger checker script /opt/bin/checkTrigger.sh is called by cron every minute.

First the script is checking if it is running already. (avoid duplicate run)

In order to do so it checks if the activity file exists. (/opt/var/dataBackupRunning)

If the activity file exists, it terminates immediately. Otherwise it continues.

Then it determines the trigger file counts. (counts directory entries in:

The script allows only one backup type per call. Because of the trigger files are only deleted during backup start the trigger for the other backup isn’t lost. It will be handled on next run triggered by cron.

So it is possible to connect the second backup drive a bit later or even in the same moment. The backups are handled serial.

What happens when a trigger counter is bigger than zero?:

Hyper backup has a config file in /usr/syno/etc/synobackup.conf.

There all hyper backup tasks are configured.

We need to identify our task and derive the is from task phrase. (see middle line in the screenshot)

You can determine the id by taking a look tot he number. Just cut of “task_”. So in our screenshot the task is is 4.

/usr/syno/bin/synousbcopy was a script until DSM5. So it was easier to manipulate it respective to replace it inside file system. Further, this script was containing the whole copy button handling. Since DSM6 the copy button handlich was moved into an app called USB-Copy. Nowadays the script is still there but contains some helper functions probably used by the USB-Copy app.

What can synousbcopy do for us?

I’ll use it in order to manipulate the copy LED state. In addition, it can be used for unmounting USB-drives. (eject)

/usr/syno/bin/synobackup is a program (served by Synology) which is able to trigger hyper backup tasks. Hyper backup uses the mode „image“. Here an example call:

When hyper backup is done it eject’s the corresponding USB drive. So we don’t need to care about ejecting.

This script or the corresponding counterpart startMediaBackup.sh is the heart of the trigger process.

It does the following:

/opt/var/dataBackupRunning is the activity file. It is used as a flag. I fit exists no other backup job shall be triggered. It will be created at the beginning and removed at the end of checkTrigger.sh.